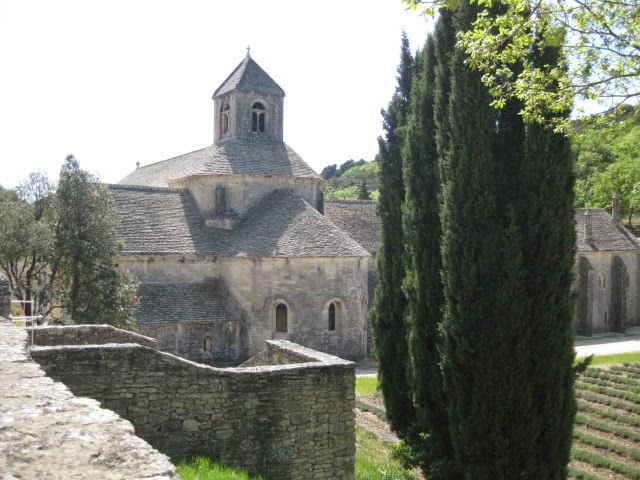 This Cistercian monastery was founded in 1148 and is only a few miles from Gordes. It was established according to the ideals of the great St Bernard of Clairvaux, whose monastic reform movement stressed a life of isolation, poverty, simplicity, and prayer.  Pious reading, chanting the daily hours of the divine office, and strenuous labor filled (then as now) the monk's day.  Silence was (and still is) maintained as much as possible.  The austerity of this ascetic movement is reflected in the simplicity and purity of the unadorned architecture of the buildings. By way of contrast with the Romanesque grandeur of St-Trophime (Arles), for example, the Cistercian abbey eschews decoration, ornamentation, statues, stained glass, etc.

Senanque prospered, as did many Cistercian communities. The rigors of life in such harsh and isolated places lead the monks to practice a very frugal, deliberate, and quasi-scientific form of agriculture. Daughter houses were soon established and Senanque flourished throughout the 13th century. In the mid 1500s, however, the abbey was largely destroyed in a violent uprising. It was secularized and privatized for many years, but since 1989 it has again been home to Cistercian brothers. The monastery is renowned as a producer of much high-quality lavender.